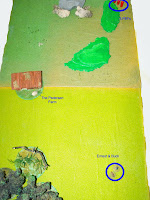 Turn 1 (Zombies 3 – Ernie 6)
It took a couple of days to walk to the Pedersen ranch, but me and Buck we had a good time, him chasing the wildlife and me just enjoying the scenery. We gets to the ranch and although there is no fencing you just knows it’s their place as you pass the copse known to all as Pedersen woods. The ranch house is to my eleven-o-clock and there are a series of hills to my twelve, Pedersen woods is on my nine.

We stop and I take stock of the land ahead.

“You see something up ahead, Buck?” asked I catching a glimpse of some shadows in the hills. I could swear that the dog just giggled.

Ernie moves onto the board and does not activate. Two zeds are created one in the woods and one off table (6-o-clock). I dice to see when it will arrive. It comes on table in turn 7. 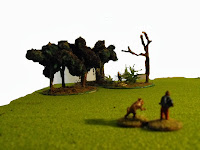 I squint into the dying sun but can’t make head nor tail of the nearly eighteen months but I didn’t need a Doctor to tell me that the shambling figure before me was a ‘roamer’. 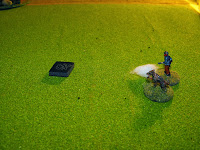 That’s when it all came flooding back, the panic, the horror and the fear. I just reacted, and that ain’t something you want to do when fighting the un-dead. I swung up Lilith and loosed both barrels. Shot ripped through the emaciated corpse and it disappeared in a cloud of red mist.

Realising that the report of my gun would attract any others I spun hither, dither looking for sign, but none was visible.

No activation for E but the zeds did. The in sight test was passed and It was easily dispatched. Doubles required that E would have to reload. Unknown to him a zed was created ‘off table’ and would appear at 7-o-clock the same turn as the initial z

Now that shadow I was chasing came into view. I could make out about half a dozen shapes. Buck now he pumped up his shoulders and barred his teeth. He released a low threatening growl, not his ‘roamer’ growl, but his; ‘bring it on growl.’ 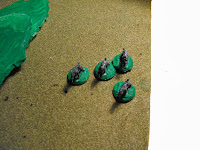 I focus some more and them shapes take the form of a pack of dogs.

“Buck, I think you and me are going to get into a fight,” I says slipping fresh shells into the breach. 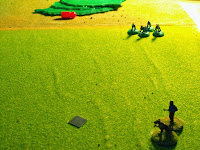 One of the PEFs resolves as a pack of 4 feral dogs. They are too far away to charge into melee and just trot forward. 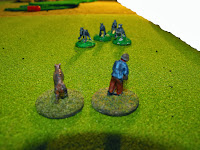 I check the distance to Pedersen woods. If them dogs rush us we could be in for one hell of a time. But I reckon that they’re just too far away and I decide to make a stand. Nothing like being prepared and I pull back the hammers on my gun.

No activation for anyone.

I keep my eyes on them dogs as they make their way towards me and Buck. Now Buck he’s always up for a scrap. But hell there’s four of them and two of us, well Lilith makes three and I bring her to my shoulder and pick a point within range. 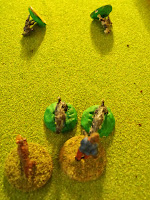 It happened like a twister hitting the earth. One second they were milling around and next they were bounding at me teeth bared and barking like beasts possessed. I let them have both barrels and two go down.

Of the others one jumps up at me it’s teeth biting down on Lilith and I see the tips of a couple break off. Out of the corner of my eye I see Buck bob and weave away from the attacks of the second.

Yet again no activation for E. The rest is self-explanatory. 1 z is created in the trees.
Turn 7 (2-3) 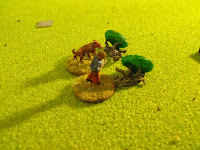 That hound sure had a strong bite and I’m glad that it wasn’t on my arm. I twist and slam the dog into the dirt, it squealed as its back hammered onto the earth snapping in two as I bear down on it. It shudders once and lies still. I turn to help my buddy to find that half the other’s throat is in his mouth. Buck spins and barks, I turn to see one of the dogs I shot get to its feet. He obviously thinks better of taken us on and slinked away.

I smell them before I see them and Buck he slipped slowly around my feet to face the way we’d come. 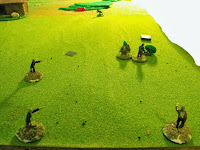 E’s second activation has him in melee! Both hero’s win their fights. The two zeds from the initial placement appear on the table, but cannot activate. E has his back to them.

They’re on us before I can turn. I feel the cold of one of their hands through my shirt. I drive back with Lilith’s stock hammering it in the stomach, I feel the flesh just give way. Dropping her barrel I changed the angle of old Lilith’s butt and drive upward catching the creature under its jaw propelling it to the ground. Buck’s locked in his own combat and there’s a third on the way. 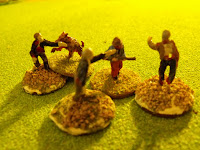 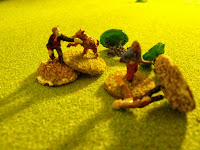 It came on me it’s blackened hands grasping for my throat. I could feel the other trying to claw it’s way up my leg. I lash out out with my foot and send the latter sprawling onto it’s back. I swing Lilith around in a wide arc before me swiping away the avaricious hands of the former and hammer her stock into it’s temple. The creature’s head popped like a water melon, there was no time to admire my work I turn and smash my foot into the face of the roamer that was trying in vain to get up.
Now buck he’s holding his own and I consider settling down to watch the fight.

A PEF is created in sector 2. 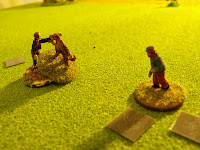 Then catch sight of a look Buck’s eye saying, ‘you getting engaged here?’ If I didn’t Buck would be hell to live with and that ain’t something no one wants. I think this time lay down Lilith pull my knife and slice the roamer’s head from it’s body. It collapses to a heap on the ground. I look down at Buck and he’s standing there with an arm n his mouth and he looks pissed.
“Good Boy,” I say to him, polishing his head and sheathing my blade.
Buck, he spits out the arm and just stares me down. 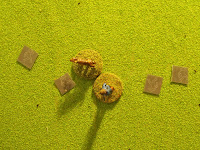 I thinks it’s best to stay out of Bick’s way ‘til there’s something else to occupy him. I retrieve Lilith and check her load.

Yet again no activation for E. 2 PEF’s created in sectors 1 and 2 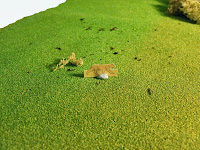 Time was getting on and I had no desire to be stuck out here in the dark. I could push on the ranch house and hole up there for the night. But what’s in there? Buck and me had dealt with four zeds and a pack of wild dogs, one of which was still out there.
“Report of A roamer out by the Pedersen Place! They said. Just go take a look! They said. Holy smoke Buck! Four of them! And a pack of feral hounds!”

Buck dropped onto his stomach and emitted a rumbling snarl. I look into the distance and just behind the ranch house I make out a mountain lion. “God damn and blast! That’s all we need. Hey Buck?”

One of the new PEFs resolves as a medium ferocious creature. A cut out  from www.juniorgeneral.org. 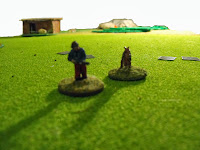 “Time to high-tail it outta here Buck,” I say, rolling away from the Pedersen place and heading home. Buck follows me.

“You know feller? We’re coming back here to clear these things out. I’m going to get Eric, he’ll give us a hand ‘specially if there’s a buck or two in it. Well there’ll be at least one Buck, hey!” I laugh at my own joke. Buck I’m sure he snorted in derision.

Thoughts
Running a FFO game I found the rules a lot easier then previous sets cobbled together. It did take a short time to get used to them but once I got it the game really flowed. I had a couple of house rules and I’d created my own PEF tables. There were a couple of more resolutions, in the scenario, but they had no bearing on the game. I’m not sure about the ‘attack from the rear’ melee rule but it does make survival more probable. I can’t believe that of 13 turns EC only activated 6 times and most of these were when he was in melee. But that’s the game. I forgot how much I like playing and how much I missed it.

I’ll do separate posts for the quiz, pimping and results.

Thanks for popping by and reading. Take care.