At last I managed to find the time for a game. As I want to post at least on BATREP a month I've rushed this one out and not paid too much attention to the narrative. For those who don't know the activation rolls are zeds first characters second. I've made up some house rules and created some tables for the game. I'll comment on these at the end of the series.I hope you enjoy the tale. (If you want to check up on what's happened before please check out the previous posts.) 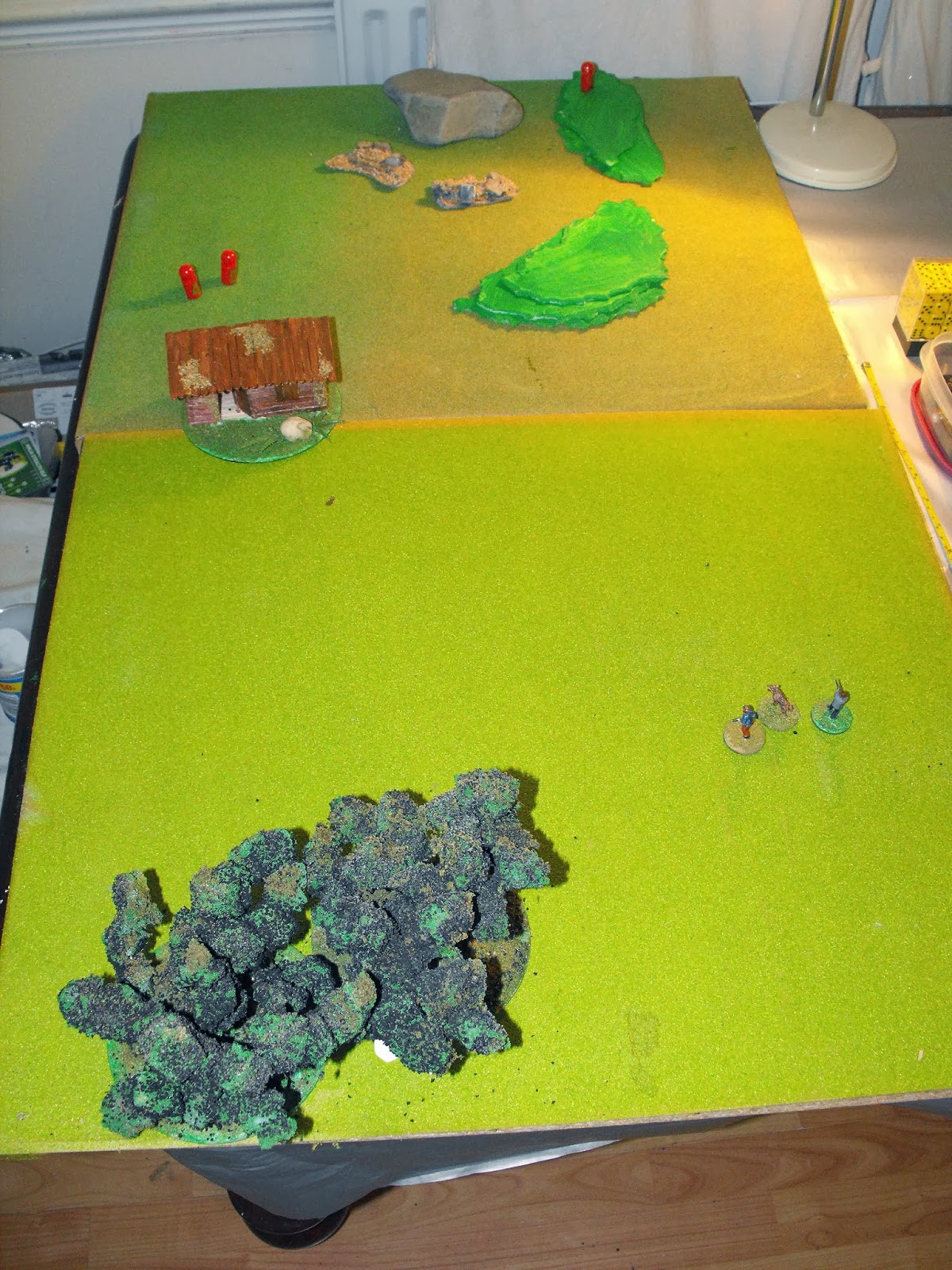 Me, Buck and Hector squatted at the edge of the Pedersen’s place. He gives me the butt of his roll up and I takes a drag.
“So Ernie, all we gotta do is check out da shack, make sure tha’s no sick n’get back?”
I stumps out the remainders and says, “sure thing.” We both move onto the farm.

Well we steps lively and make our way towards the shack. I’m scanning the ground ahead and my eye catches a disturbance in the ground.
I flick my head to Eric, “Spoor,” says I.
Eric he squints, shrugs, “If you say so man.”
We both head towards the marks. 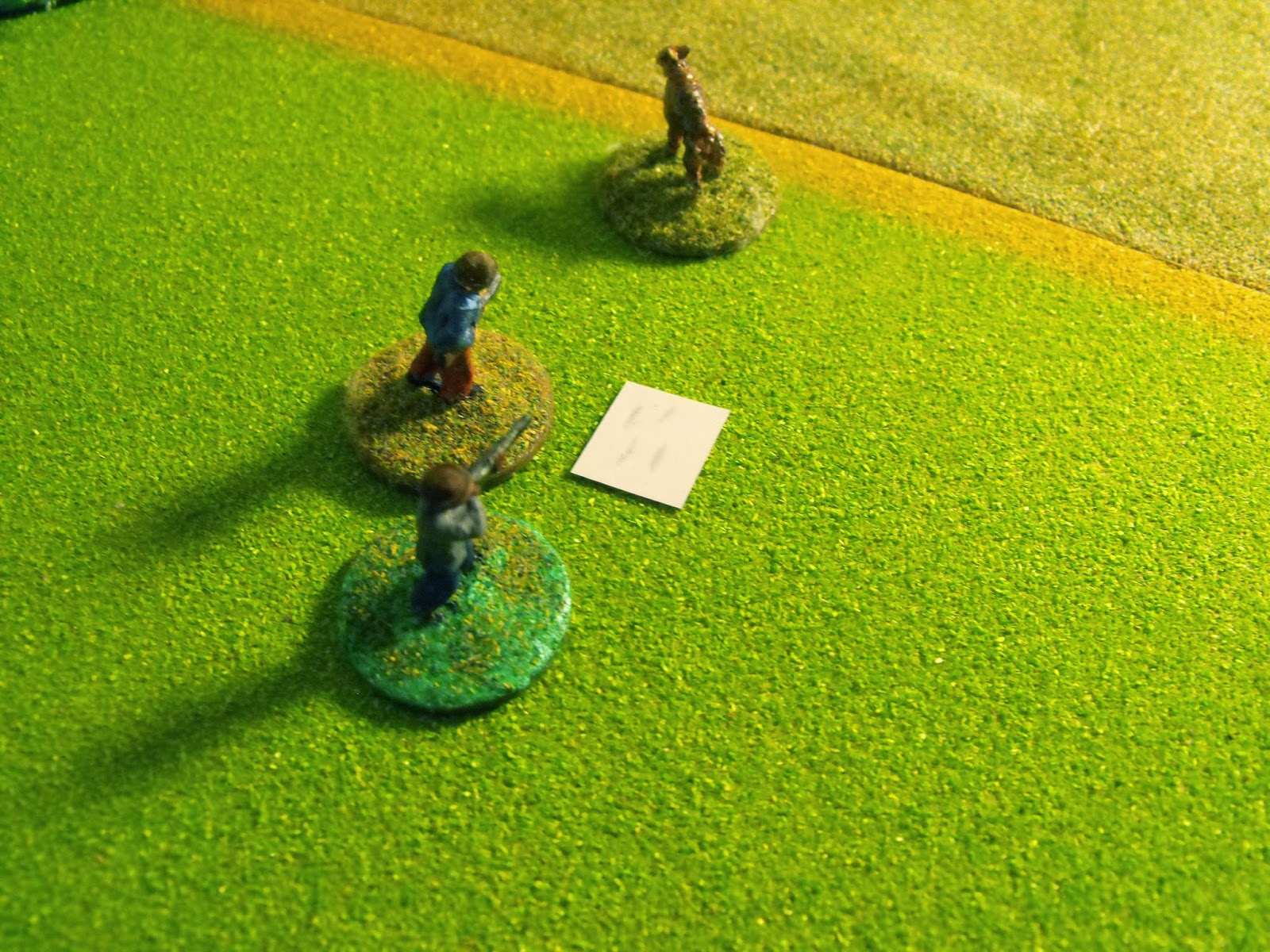 A PEF is resolved and it comes out as a spoor. The other PEFs move around accordingly but not seen. 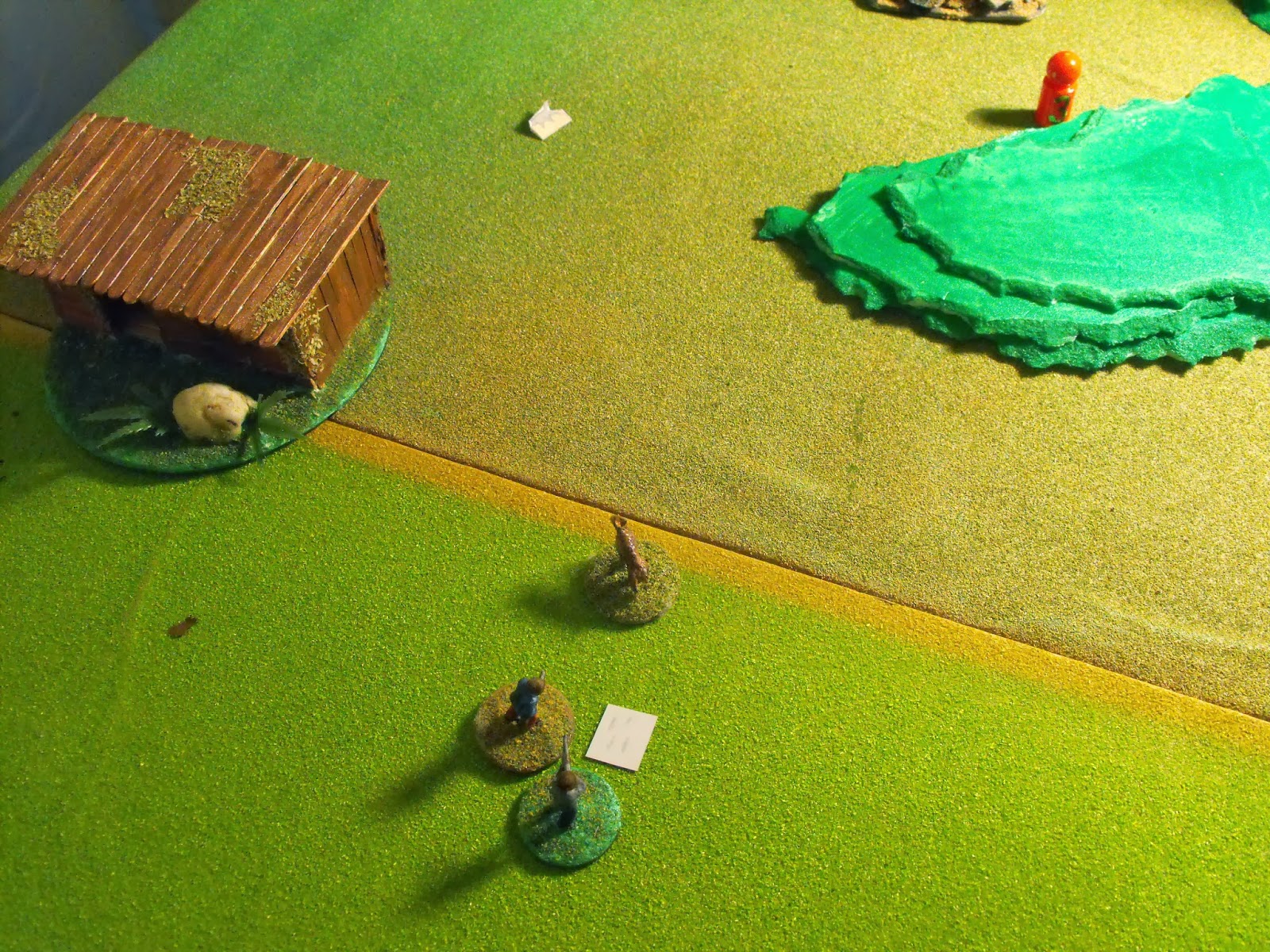 “Buck! Guard!” Buck trots a few yards ahead of the tracks and lays flat, me and Eric check out the spoor.
“Any ideas?” Eric asks.  Shake my head.
“Could be anything.” I check the rims and the shape but nothing shows up, “bin here since I was last up this way. Could even bin Buck or me?”
Buck turns his head and snarls at me. I throw him a wink and stand up. Eric is staring into the distance.
“Ernie, that there’s a Possum,” he says flicking his head past the shack. “Stew, for supper?” he asks. 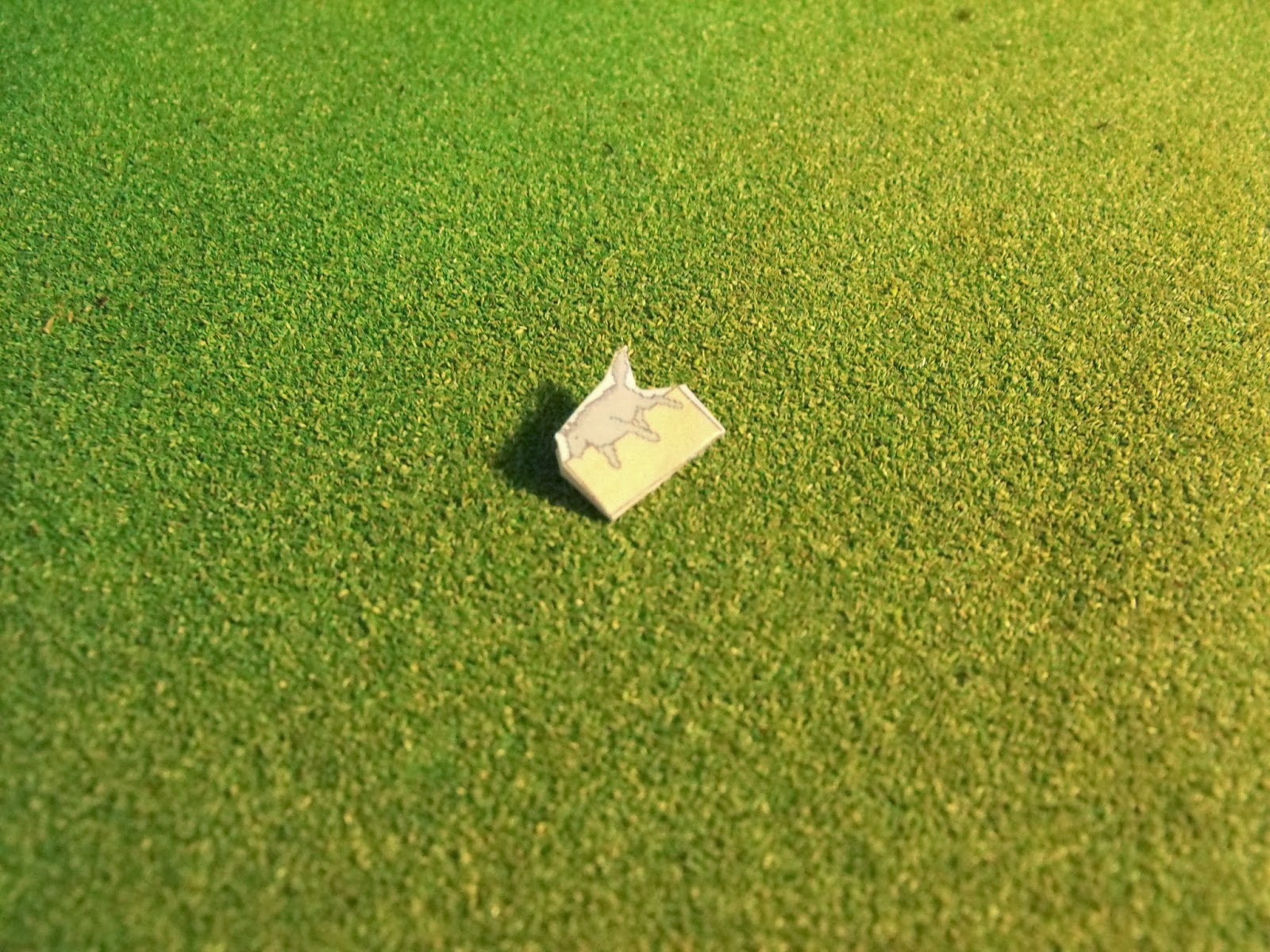 Now Eric he can sure cook so I nods and the possum becomes tonight’s dinner.

The spoor is unrecognisable but the second PEF reveals as a small feeder. The shot fails to attract any zeds. 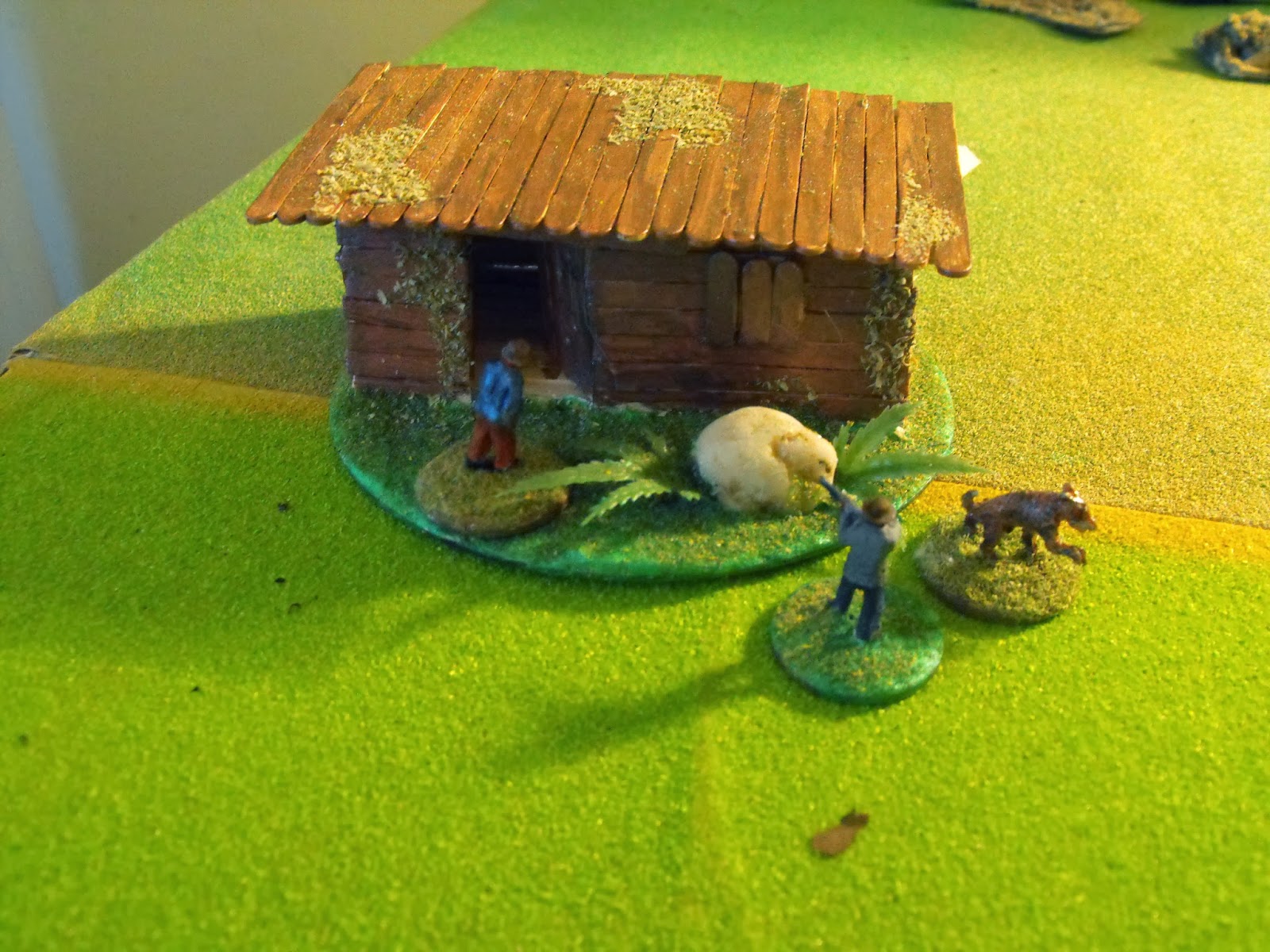 We both make to the shack and I send Buck to the rear to protect from any surprises. I check the door, it’s unlocked.

Turn Five (1-5)
No character move, PEF shuffles around. This becomes a trait. 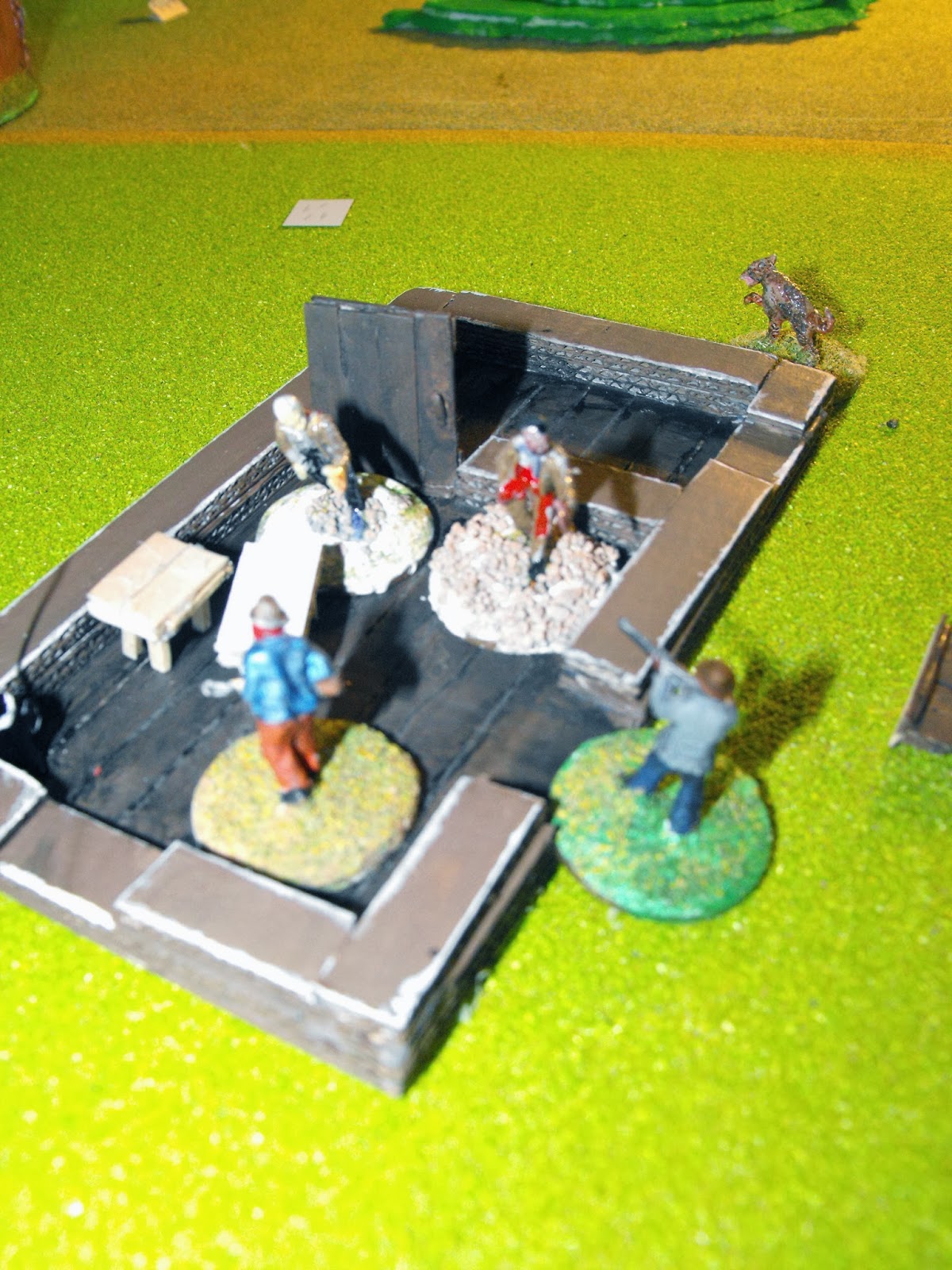 I’m in front so I pushes the door open and step inside. The smell is profound and I pull the hammers back on both Lilith’s barrels. The cry is all I need and as my eyes get used to the darkness I see the shadows of two beasts. I need not think and loose Lilith.
Smoke and saltpetre fill my eyes and nose and I spy one of the figures thrown into the far wall and the second staggers and falls.
Eric, now he follows me in and the sharp crack of his rifle penetrates the ringing of Lilith’s cry and the thrashing body of the second zed collapses.

The doubles created an extra zed which I placed in the bed room, to be found later. The R&R card put up two zeds. The shotgun’s spread took one out and knocked one down. Eric did for the second. No zeds were created.

We both catch our breath and I go and check the bedroom door, sure enough it’s unlocked. I lift three fingers and Eric he nods.

Don’t know why I did nothing here?

No activation but a fire starts in the stove?!! 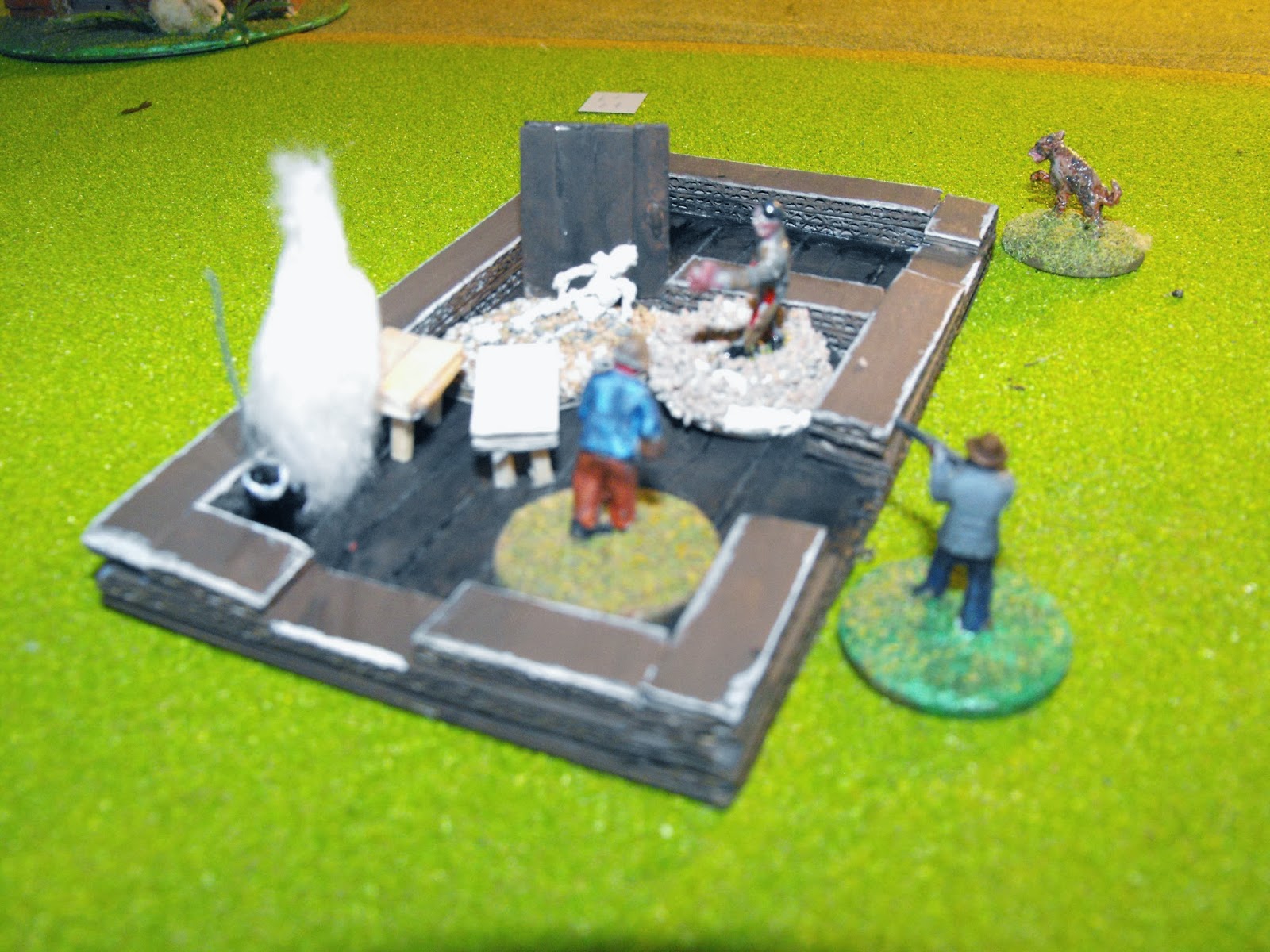 The second double gives a ‘zombie feast’ adding +1 to all zombie generation for the rest of the game, will this prove to be a real issue?

I push the door open and Eric steps into the frame. He pops off a shot and I hear a body hit the floor.
“Man,o’man,” says he, “dis is too much fur a couple o’ hunters. Sure we needs to high tail and git the Army.”
Now I can’t argue with his reasoning, “I thinks you’re might my friend. Let’s git and hand this one right back to Lynch and his boys.”
Eric beams and pushes past me to the door.
I rummage around the shack and pulls out a hunting scope and a fine bottle of whisky and follow Eric into the sunshine.

I forgot to roll for a zed so I did so at this point and I placed it in the woods.

I call Buck to heel and we all move to leave the farmstead. Buck now he has one hell of a nose and crouches down facing the woods. Both Eric and I look in the general direction.
“Sure there Ernie. It is but one, he’ll be no problem.”


I agree and we both head home. 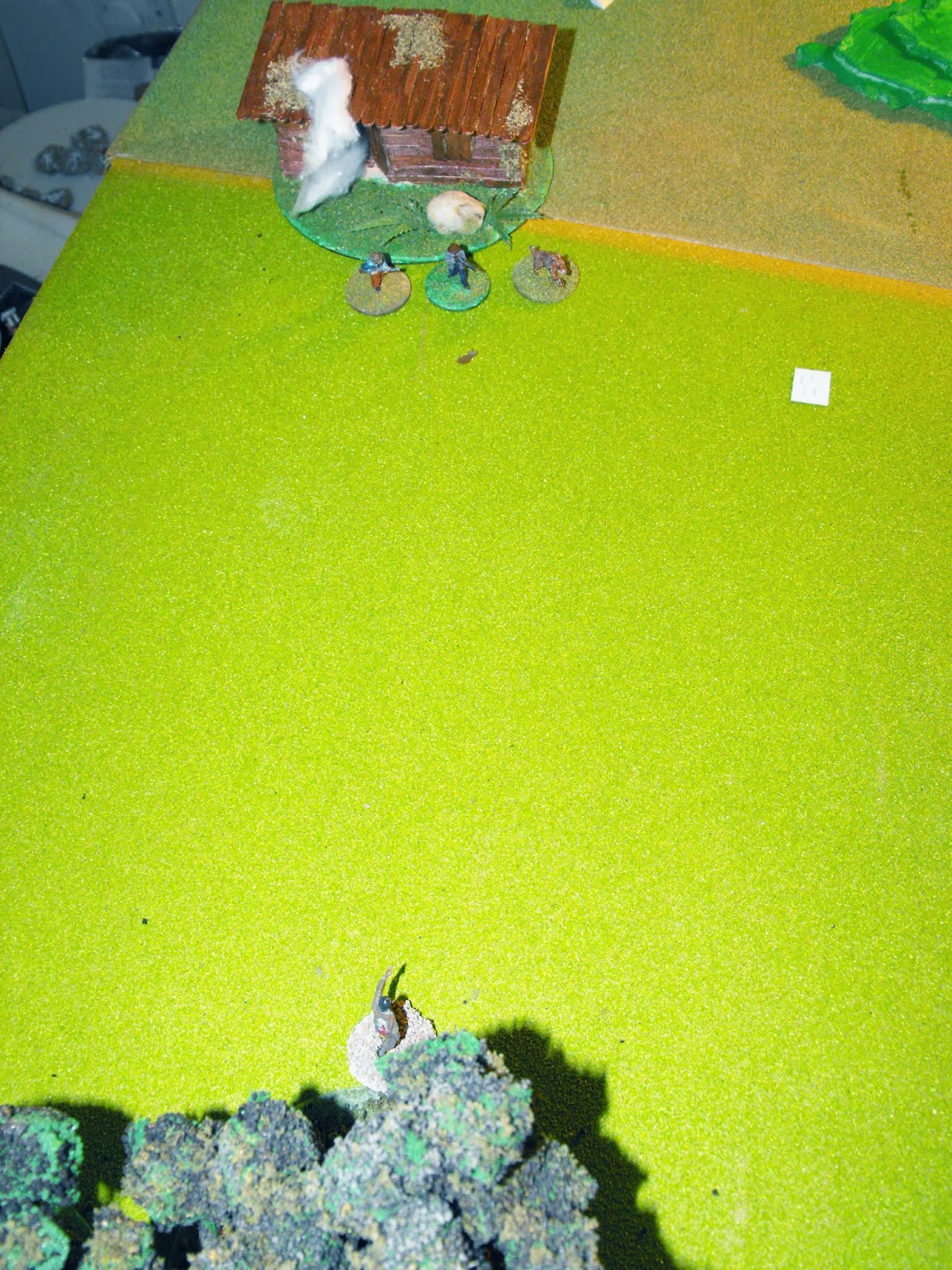 Ernie, Buck and Hector have got about three activations to leave the board. It's been a bit of a standard zed hunt so far. There's still a PEF to resolve and a few doubles to deal with.  Tune in to see what happens next!

I hope to get the next instalment up this weekend, but it is the kick off of the Six Nations Championship and well that BATREP writes itself.

Thanks for stopping by, I hope you enjoyed it. Try and keep dry.

I know I said that it would be tomorrow, but there was a level of drying involved. This project came out of a Batrep I read where a fellow ZBA member bemoaned the lack of rubble in his gaming box. So off I went.

Colgar6, in your last zombie batrep you said that you had no rubble for your 'collapsed wall ' random incident card. So if you want these they're yours. You can find my email on my personal description part of PZ,(drop me a line with your address) gratis btw too light to ask for postage, I won't be offended if you do not want them. If any one else wants some let me know.

Toe is healing but now is as black as night.

Being compelled to sit about certainly activates the 'must do modelling' button and so I embarked on a couple of projects. One being some 'scenery' corpses or casualty markers and the other a piece of terrain.

This is number one.

I'll give them a dark wash when I'm at that stage with the other project. More to follow tomorrow.

A Wager, a bottle of mayonnaise, onwards and upwards

I'm not really a gambling feller, apart from the Grand National and the odd gentleman's wager at m'club. So as it happened I spun a few quid on Leinster last week with the club's Francophile and won. With cash being so vulgar I gave him the option to bid on a bundle of stuff in an ebay auction and lo and behold I won again and got the below goodies for less then a tenner. Result! 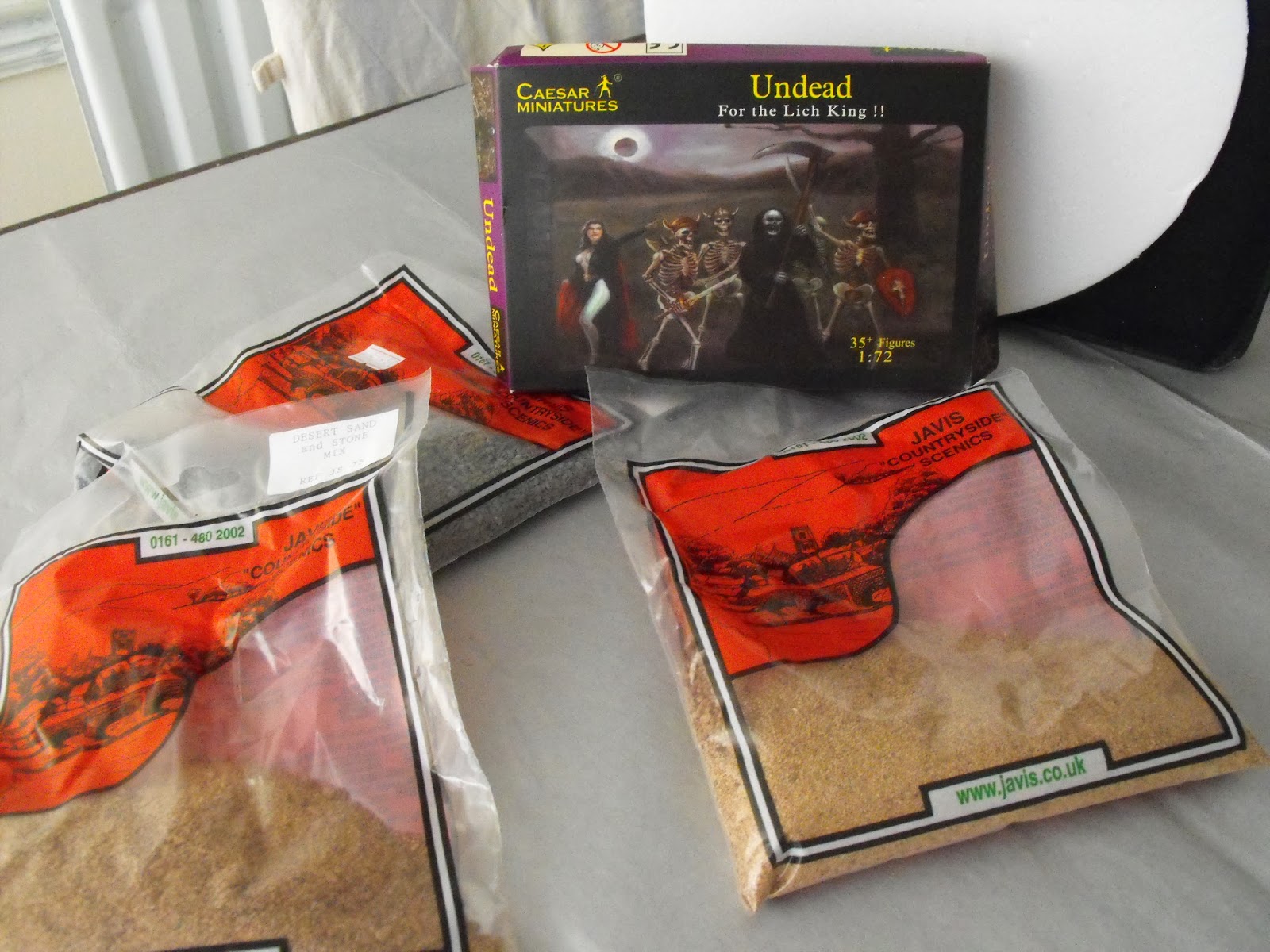 I have plans for all this stuff this week.

Ah the mayonnaise I hear you cry. I dropped a bottle of mayonnaise on the floor. Now it didn't break because it landed on my bloody toe. OK you wouldn't think its that bad would you but it dislocated the digit!


On the plus side; this means that I have got to rest it. So with the prize goodies, my newly found interest in terrain building and the desire to game again I should be in for an interesting week shuffling around my 'man tent'.

With my luck this week (jury is out over the toe thing) I'm off later to buy a lottery ticket. :-)

Good Luck to you all out there.

With a spare hour yesterday morning I thought that I'd have a bash at finishing off the tile.

Thoughts:
Now you folk out there have far more skill with the brush then I so I'm sure that you'll get a better effect. But generally I'm pleased.
In future I'll standardise the door and window dimensions so no matter what the tile is I can have a selection of doors and frames to use for gaming purposes.
There are no 'in action' shots 'cause I hope to have a game this weekend where the tile will feature.

Thanks for the comments to my previous post, they really do help to spur one on.

Watch yourselves and thanks for taking a peek.


I was surfing through 'YOU TUBE' the other day and I came across this:

It's a video by a character called 'DMScotty' (http://dmscraft.proboards.com/) OK I know it's D&D but the terrain techniques can be adapted.

This got me to thinking and I thought that interior action has always been difficult as the usual, papercraft, building interiors tend to be too cramped for figures once they are based. So came this project, Build a cardboard interior tile for your buildings and move the action there when appropriate. This also helps out with Ed T.'s (the THW guy) interior rules.

The plan: The experiment was set on my backwoods cabin. I increased the dimensions by 1/3rd for the tile and away I went. (I had a write error  on my camera and didn't realise 'til now so the photo tutorial is a bit bare.)


3. Glue the walls down
4. Unlike DM Scotty's idea I've built the walls up two layers. This has opportunity of giving the tile a slightly more realistic window element. It's hard to see in the picture but I hope that you get the idea. 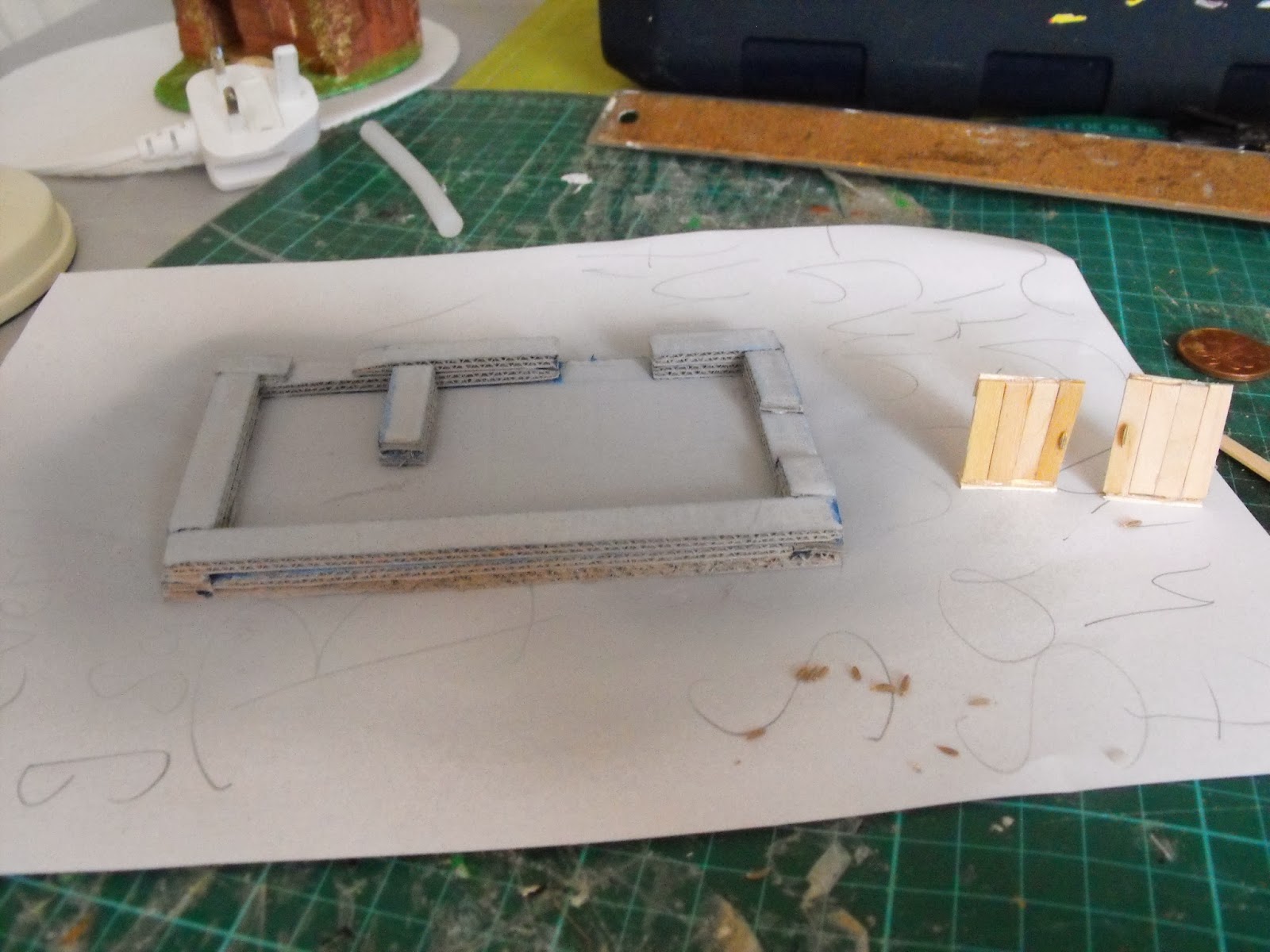 6. Whilst it was drying I knocked up some doors, a bed and a stove. 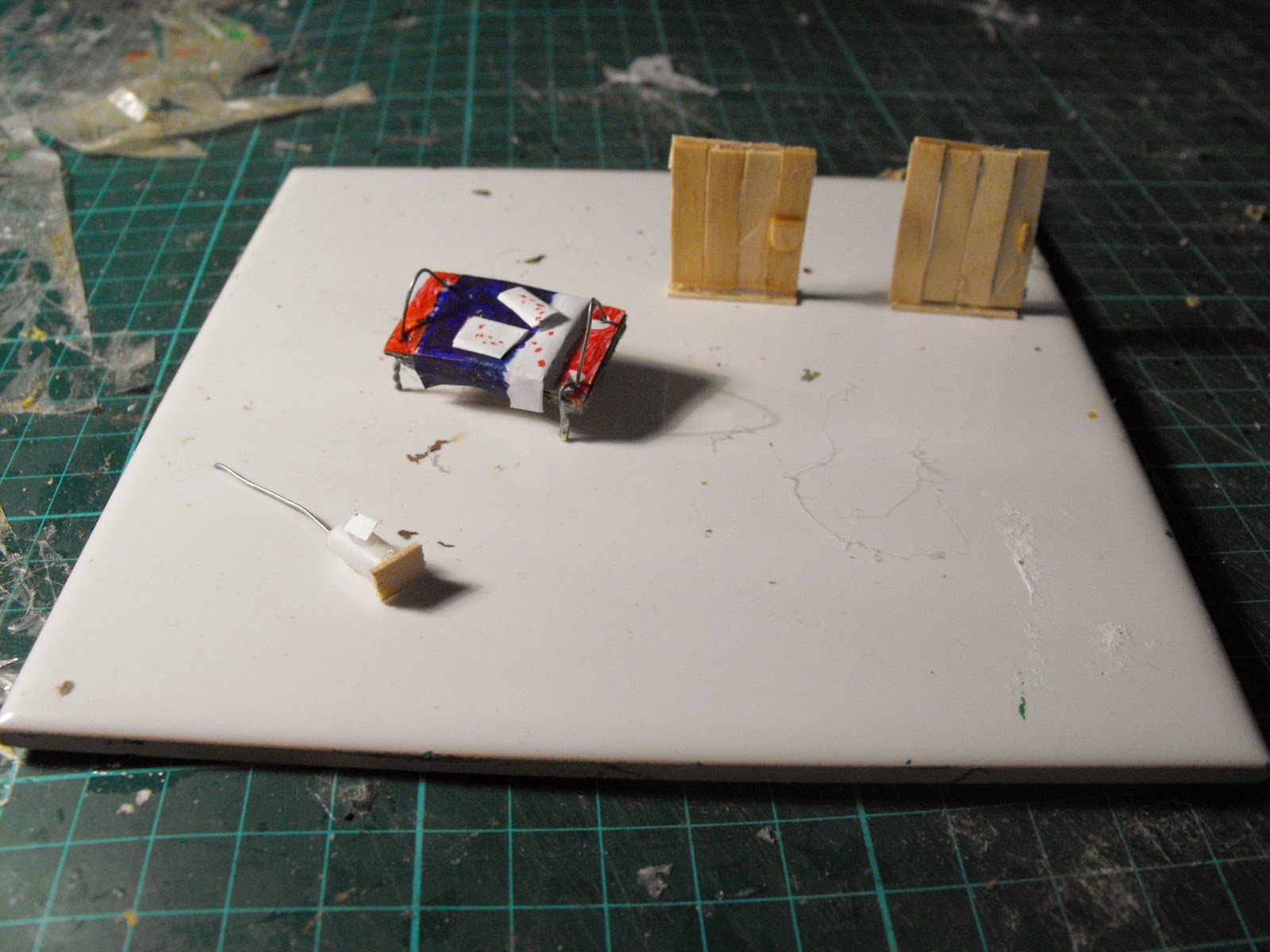 7. Check it out, prior to painting. 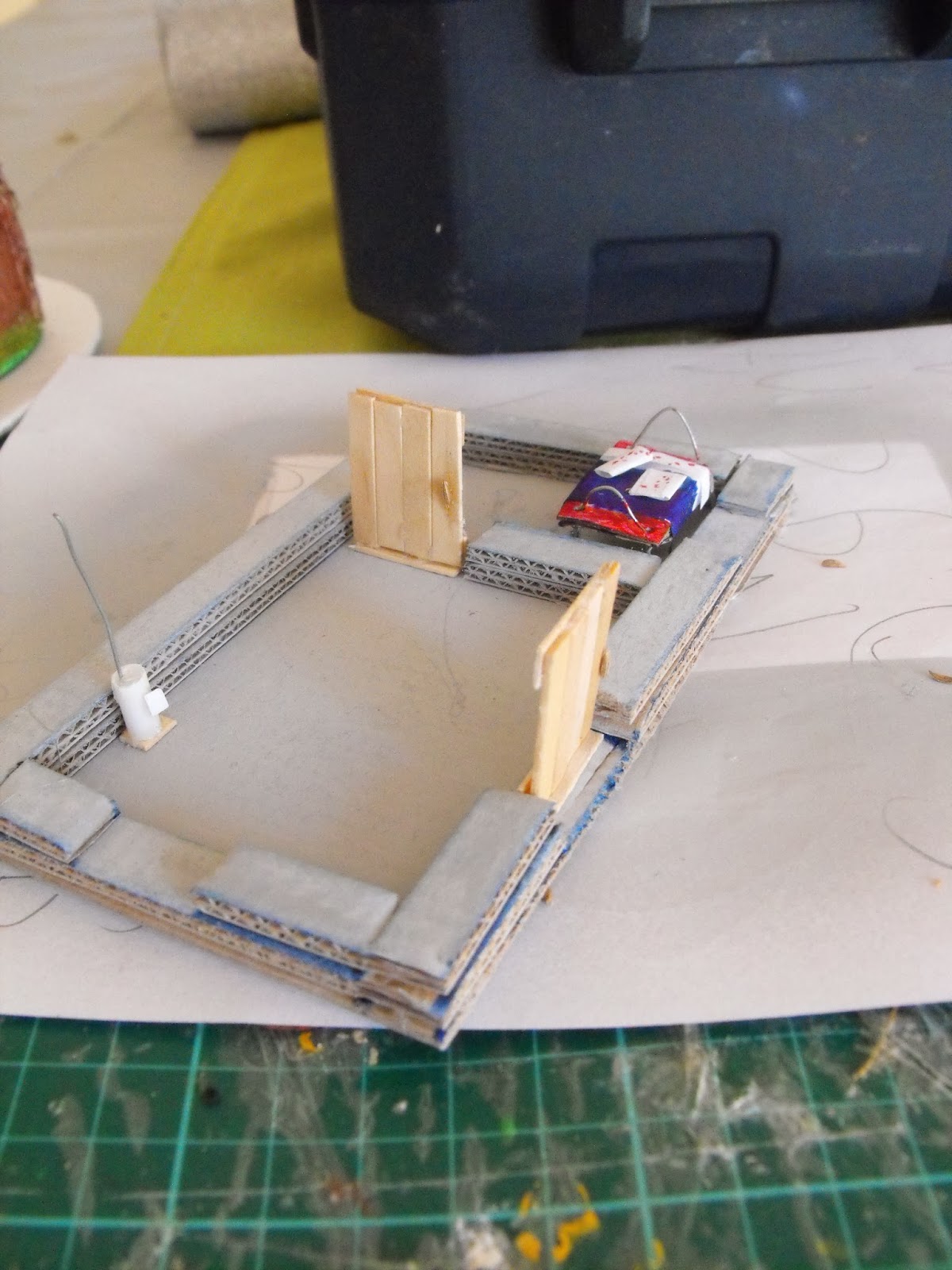 The Viscountess hid my large cutting mat behind a radiator (something to do with making the place look untidy ?) and it warped. Unknown to her it's been under her side of the mattress over Christmas and its come out a bit better (don't tell her or the lads'll be fatherless. ;-).

I scraped it using an old blade an here's the result!

Well that's all for now. I've got to get some more clear plastic backing before I paint and I think I'll pop out and get some brown Acrylic to finish this off.

Thanks for popping by and stay dry out there.

Yep the annual Janus report looking backwards and forwards simultaneously, as represented by the Roman God. Those of  you of a certain age may remember the other Janus from the Valiant comic (my favourite comic until the Action and 2000AD came along).

Really all in all I didn't do that well. In my defence the heart thing took a bit longer to sort out then I imagined, I didn't respond too well to the blood thinning agents and the op had to be put back six weeks. But it got stopped and restarted and I'm fine now :-) The Inspector left and came back; redeployed the other two officers in my office leaving me with all the work to do and that really hammered the gaming as I didn't really get the time off I hoped :-(, although it has accumulated and I don't have to go back to work until I finish ;-) I had a GREAT holiday with my family in August and introduced the nephews to D&D as well as getting one of them and my Brother-in-law  hooked on X-Wing miniatures :-) (more gamers is never a bad thing). So that was 2013 in PZ land.

And just because I like pretty women. I give you Miss January 1941. 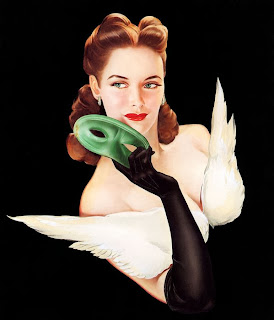 All the best to you all and your folks for 2014 and I'll see you in the sphere.
Thanks for popping by.