I am trying to keep up my blogging. So here is this week's As you msy know I am heavily involved with a local members club. Our prices have to change, so my mate and I went out to REECE the prices. Here our our local pubs. 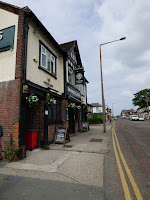 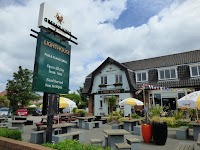 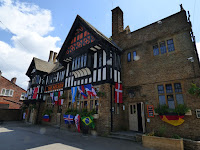 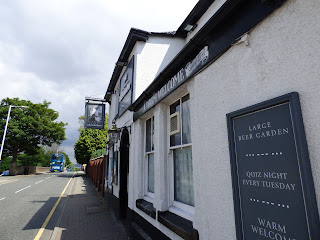 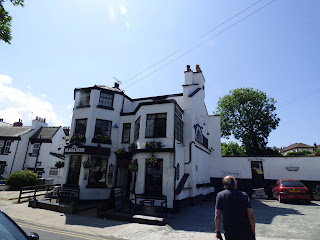 Trebor dines at the The Ginger Grizzly.

THANK YOU. And a bit of backstory.

A REALLY BIG THANKYOU to all of you that made comments. It has invigorated me to make an effort to keep this up.

Trebor SREVEI is the Peninsula Warden, a law enforcement agent in a lawless part of the county. The county seat is the walled city of Deva. The Peninsula is north of that (c.f. the Wirral.) The main town is Budestone, a port on the northern shore (I am working on the town map and buildings as I type.)

Trebor’s main protagonist is Maurice HIGHSPRUCE, a half elf/orc, who has control of all the criminal gangs in the area. Maurice lives in the wilderness. His gangs work in the town. The gangs are delineated by race.

There are four hostelries in the town, these are:

Being a port these establishment are not exclusively racially orientated, but are controlled by the named race.

Trebor has digs in The Ginger Grizzly.

One of the things I love about 2HW rules is the random nature of them. BRILLIANT (well done Ed!) My original theme was for Trebor to search and locate a ‘downed’ pilot (from a Da Vinci device) within the zombie ridden hinterland. Two Hour Wargames' game structure changed it to what it will be. So folks I have no idea where this is going.

OK the idea from Sue Laflin-Baker’s book. Which is good fun I can outline the plots in more detail if it is wanted. It is all about the Conference of Wargamers (COW) who dined and then after dinner played one of her plots in the book.

My SWMBO is out this evening on a works leaving do, so I am home alone with my boys. As I didn’t get to dine for the first outing tonight I am dining at the Ginger Grizzly this evening. (N.B. The Landord/chef at the GG is a retired Landsknecht combat chef!)


Take care out there.

Prologue
The hero in this series is Trebor Srevei, an elderly Landsknecht at the end of his career. He’s got himself a post as the Peninsula Warden beyond the city of Deva. A Peninsula saturated with the undead and raided constantly by dwarven, elvish, orcan etc… ne’er-do-wells. He has been tipped off  by the local padre of a raid. Recruiting Faz the Fletcher, Broadsword Bob and Father Georgio , Trebor sets off to intercept the raid. (Lots of backstory which I’ll try to fill in.)

Turn 1
“The delta, my son, is one evil place,” said the priest, “undead, everywhere.” 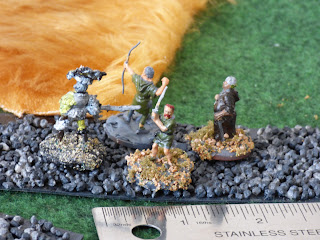 Trebor and his crew followed the Roman road. No sooner had they entered the delta then they were launched at by two undead. 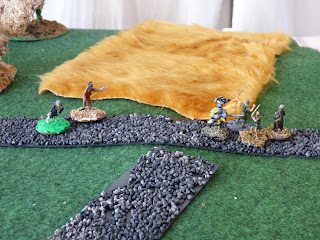 Faz, loosed a shot the first one, his arrow passed straight through the creature’s body.

Trebor smiled and hefted Fratgavo (his zweihander) and charged the two beasts.

Crashing Into the nearest the nearest he just managed to push it back. Sealing the grip on his sword he brought it on a wide arc that cleaved the second creature from cranium to crutch. Reversing his grip Trebor brought his blade back up between the legs of the second assailant, despatching her just as quickly. 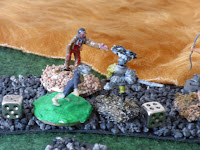 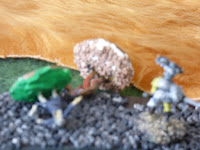 Faz and Bob hit the field followed by a more reserved priest.
They all found nothing.

Turn 2
Ralgrid Blazingrock was looking forward to this raid. He’d had been told the fortune of the Dread Pirate Ebony had buried his fortune on the delta, all he had to do was find it. Shoring his longboat he led his three crew into the sand dunes. 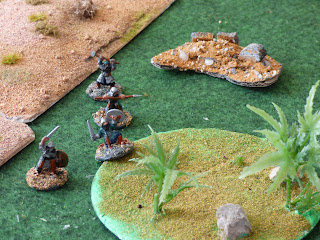 His crew’s eyes brightened and they ripped into the hinterland.

When they finished Ralgrid was presented with a potion of healing and one of courage, a dancing sword and armour of protectection.

“Maurice, will be well pleased with these lads,” he said, “let’s move on.”

Un-be-known to the dwarves and humans, a mob of undead moved from the swamp to the woods. 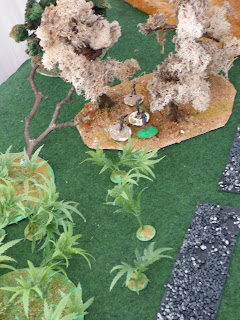 Turn 3
Trebor surveyed the area and chose to follow the path to their left. 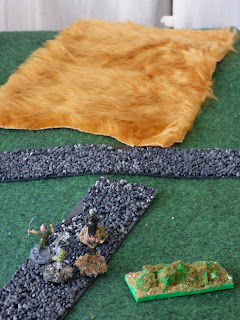 The undead made no move and avaricious dwarves pillaged the land before them.

Turn 4
“This a’way lads,” said Ralgrid, “over the path and let’s see what’s in the underbrush.” 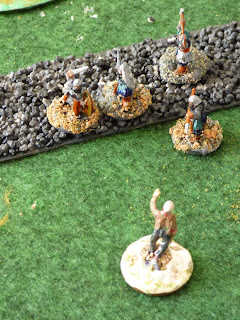 The crew did as they were ordered as a lone creature loomed into view.

“Arh, my captain,” cried out Dari, “leave this wee creature to I!” he screamed levelling his spear and charging the zed.

The zed stared with lifeless eyes at the charging dwarf and took a step to its left. Dari’s momentum carried him passed the creature that fell onto his back, tearing through his leather armour with sharpened nails. 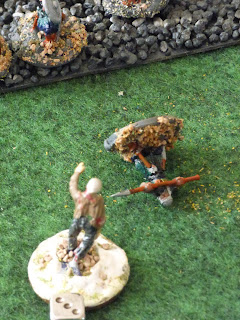 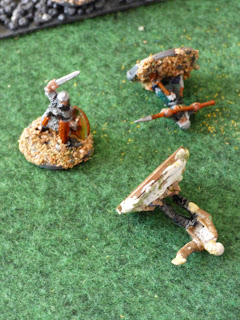 Ralgrid roared and ran to assist his crewman. He was too late. The beast raised its head with a mouthful of Dari dripping down the decaying chin. Ralgrid swung his blade and the creature’s head sailed through the air.

Looking at Dari’s bloody corpse he sighed, “there’s nothing we can do for him now shipmates. Search the area.” They find nothing.

The sounds of Dari’s fray reached Trebor. He led his posse further along the path towards the sound.

Behind them all the zombie mob moved into the wheat field where Trebor had engaged the zeds earlier. 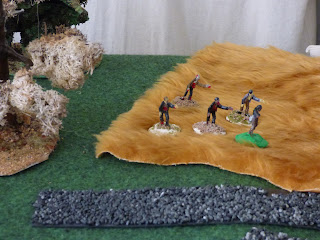 Turn 5
A displaced stone and the scraping of a hob nailed boot brought Trebor to a halt. He readied Fratgravo. Dari and crew hove into sight. 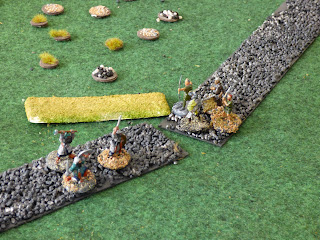 “Hail dwarf,” he said spinning his zweihannder so the point rested on the path. He leaned against the blades cross piece.

“Now boys. Being the new Peninsula Warden here, I can’t be letting you fellers run riot ‘round here.”

“And what if I’s disagrees with ye?”

Faz nocked an arrow, Bob raised his broadsword and Trebor patted the pommel of Fratgravo.
“Well dwarf, it could get very bloody.

Ralgrid pursed his lips and considered his options. They had some booty, but had lost a good dwarf. In the distance a howl of the undead sounded.

“This day is at its end human. I’m sure we’ll meet again.”

He indicated to the remainder of his crew and they backed into the dunes making haste to their ship.
The undead mob shambled into the far distance.

Trebor led his men from the delta. 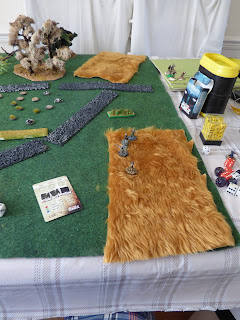 Father Georgio’s eye caught a glimpse of something shiny. Bending down he scooped up a bottle, a sniff test told him it was a potion of rage. He rushed to catch up with the remainder of his group.

Critique.
A fairly straight forward episode. Which was good for me as I was getting back into the rule system. It could have all gone south very quickly had some PEFs been created and that zed mob turned into the board.  (All zed movement was done randomly.)

Saying that I enjoyed playing the game, although I'm very rusty in my reporting.

As you know there is always a story that accompanies my AAR’s I’m working on how to present it.

Thanks for calling in.

Just by chance I picked up this book 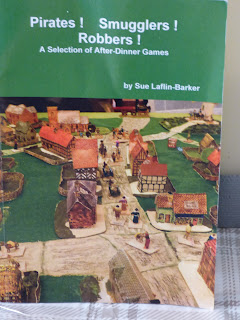 It's a great little read and it has spurred me into trying out a new campaign.

The idea is, when my wife is working, I cook myself a fine dinner and play a game. I've transferred the 18th Century pirate concept to Renaissance Fantasy. I'm using a mish-mash of 2HW  ATZ and Dungeon Crawl rules, with plenty of zombies.

Sadly, the first game has no dinner attached as SWMBO is currently recuperating from a cataract op.

The opening table is as: 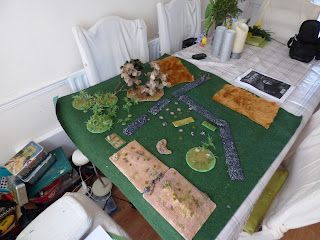 It is fundamentally a search and destroy treasure hunt. I'll play it out later today and post the outcome ASAP. (I have to lend my computer to my club this afternoon.)

As everyone gets into the convention season, my new role in life means I tend to work weekends.

So in contribution to the season. I thought all you out there may be interested in my day out yesterday (it has a military theme.)

Together with a friend of mine I went to visit our main museum in the big city. Where on display they have on display:

There are plenty of other exhibits. It is a STUNNING display, well worth the entry fee. If any of you do come to visit the display (or the port.) Do drop me a line and if I'm able I'll give you a 10/- tour of the city. 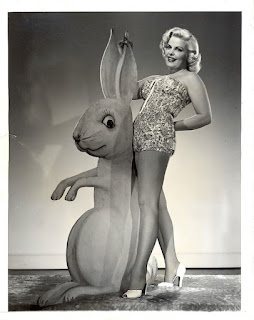 Gosh. Two years since I last posted. Too much water has flowed under the bridge (and most of it murky.) Well I hope to get back into my gaming, modelling and blogging again. Despite a change in theme, there will be zombies.

Wish me luck, and a happy easter to you all out there.