The parade broke up and all went about their duties. Sergeant Al Lynch approached George and Nozzer, "Lads, just have a quick look-see in the yards. There's been some report of new carpet baggers shackin' up that way. Now we don't want another 'Purgatory' on our hands, do we? So just roust 'em out will ya."

George Carter pushed another shell into his faithful shotgun, "right you are Sarge," he replied, "Nozzer, you drive." The two officers left the station house.

Just a few house rules. The playing surface was a bit small so all distances were cut by a third. Zed generation was achieved by a spinner and any zed created off the table didn't appear. Only two PEFs started. Zed die roll is always first, PC's second & NPCs third, in the case of doubles the second set of numbers is the outcome.

The early morning sun promised to make the remainder of the day a roaster, George and Nozzer were already beginning to sweat beneath their blue serge. Nozzer pulled the police vehicle up behind the machine shed and both officers alighted.

Only on zed appeared, right in front of the machine shed's entrance.

"Shame Sonny's under the weather, he'd love a romp out here," commented Nozzer, talking of his police dog.

"Sure, let's get this done and get down to Jack and the newbie." Nozzer grunted a reply. Both the officers moved to the far corner of the machine shed. 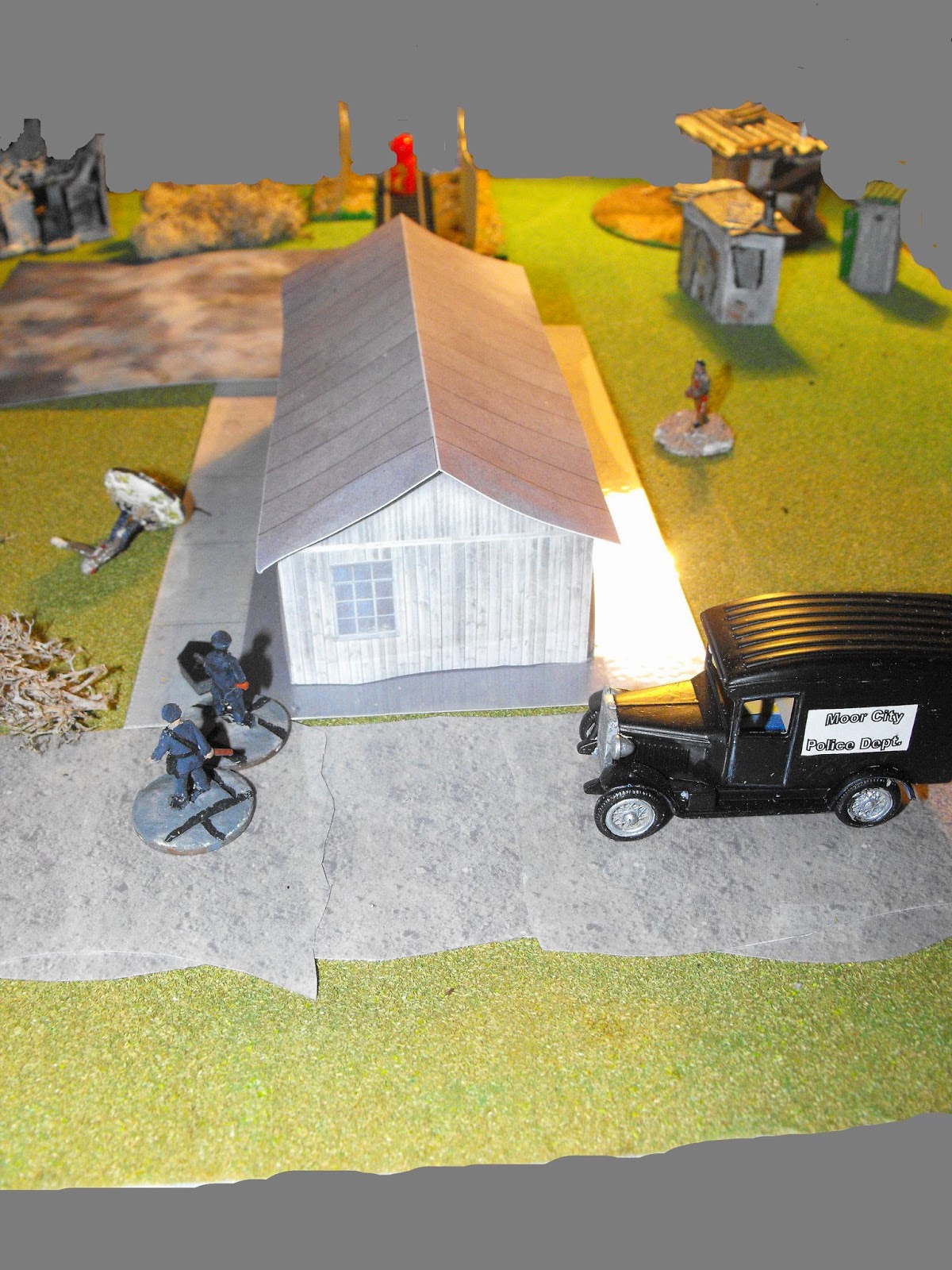 George tolerated Nozzer's yacking as they made their way around the building. Turning the corner George's mouth dropped open, Nozzer froze. It was once a man, now, just a festering corpse it's flesh hanging form emaciated limbs. The creature tried to moan but nothing but a muffled hiss came out.

George didn't need to think, he leveled his gun and opened up. The thing that was once human flew backwards and collapsed into a bloodied mess.

"Holy smoke Nozzer. I thought we'd seen the last of this."

One zed created on the 'blind side' of the machine shed.One of the PEF's moved into the shed.

"Look Nozzer, let's just check out these sheds and get the hell outta here. We gotta report this ASAP."

Once again Nozzer made no comment. George made a mental note to keep an eye on his colleague. Silence was not his thing and he was looking a little pale.

"You hear anything in there?" George asked his pal as they made it to the side door.

Nozzer put his ear to the door, listened, pursed his lips and shook his head.

William MacIntosh didn't even know that he was dead. He didn't know anything, all he craved was the taste of warm flesh and the noise from the other side of the shed sounded his dinner bell. All he had to do was follow it.

Nozzer accepted his role and gripped the door knob. George mouthed the numbers and Nozzer flung the door open. George burst through the gap the shotgun at his shoulder. Nozzer followed.

"Police! Stand still hands in the air!" yelled George. Before the two officers stood three civilians. Their clothes were neat and tidy although they all looked a little dusty.

Mikey Peanuts, Philly Chrissie and Katey Bacala had, had it pretty rough.Having to leave Raleigh PDQ with the three other members of their gang they had made their way to Moor City but the motors had packed in so they hot footed their way to the cattle yards. Tired, dirty and in need of succor Mikey chose to play the dumb hick.


"Damn n'blast officers if we ain't glad to see thee. We been afoot some time now and sure need something to eat and drink."

The officers lowered their weapons. "OK," says Carter, "there's a Black Maria out back, you can come with us."

"God bless you," went on Mikey winking at the two women making his way to the door. The females followed him.


Will heard the conversation but understood not a word. He, it, shuffled along the shed's side.

The PEF generated to three civilians, each episode will move the PEF table along one. Despite loosing the savvy roll Mikey and his gang choose to go with the cops (they have no weapons, part of a back story)

The officers stood aside and let the women lead the way into the bright sunshine. Both females shut their eyes against the harsh glare. A low moan sounded to their left, slowly Chrisse opened her eyes and for the second time is as many minutes she screamed. 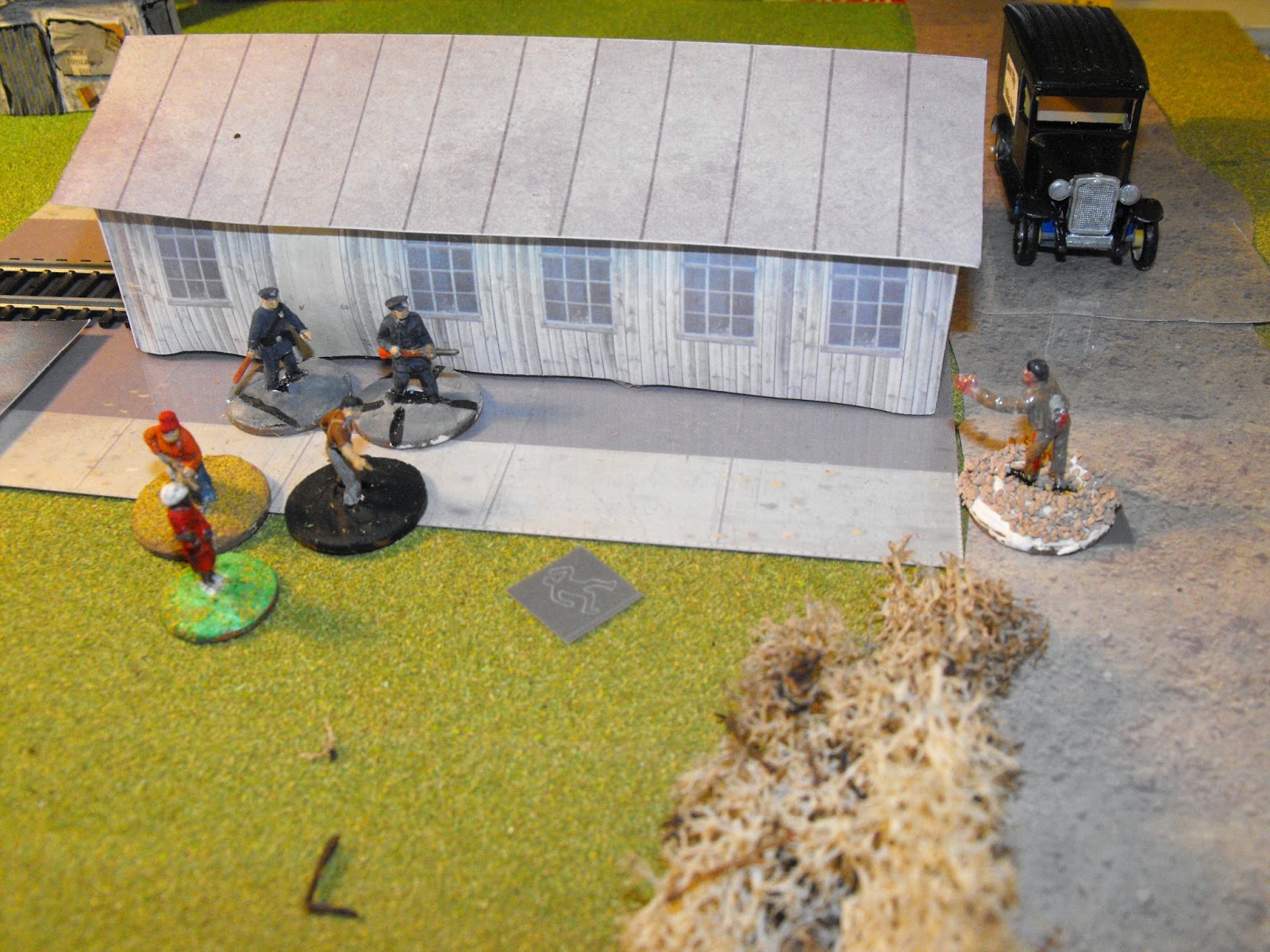 "Bloody hell!" Carter yelled bursting out of the door, followed by his partner and Mikey Peanuts. He swung his gun to bear and loosed of it's shells. The shot hammered into the wall of the machine shed showering what was once Will McIntosh in splinters.

Nozzer popped off a round which passed harmlessly through Will's left forearm.

Will stared at the black hole that appeared in his arm, emitted a bone chilling cry and launched himself at the crowd. George dropped to one knee, brought his shotgun to the aim and fired. Will felt nothing as the leaden shot ripped his head and shoulders to shreds.

A miscalculation in the shotgun rules led to GC missing his shot, Nozzer just missed. Will charged GC was allowed a shot and there was no mistake. Two zeds were created and appeared right in the path of the humans.

Turn 7 (2-4)
George Carter pumped another shell into his breach
"Don't worry ladies," he said, "trust me I'm a cop." He drew a bead and squeezed his trigger. The shotgun roared and both zeds fell, "shot!"

"I'll finish 'em for you," said the grinning Nozzer as he moved to the downed creatures clubbing their heads to a pulp.

"You folks go with Nozzer. Nozzer I'll check out them other shacks, there can't be any more o' these things. That's four we've done in. Bring the wagon up the other side of the shed and pick us up by the track."

GC shot just knocked down the zeds. No more were created.

"Come on gang," said Nozzer leading the survivors to his vehicle. George watched them disappear around the corner before turning and walking further into the cattle yard. He made his way towards the tracks a great feeling of apprehension overcoming him. Deep inside his coppering sense told him that there was something out there.

Turn 9 (1-2)
Nozzer opened the rear of Maria, "I know it ain't first class, but it won't be for long." The trio climbed aboard and Nozzer slid behind the wheel and kicked the engine over.

George stepped onto the railway tracks and glanced along the line. A middle-aged female with an over-sized revolver glared at him. Behind her two heavies looked menacing.

"You with them others that we just picked up?" asked Carter slowly leveling his gun.

"Look we're taking them into town. Now we don't want no trouble so if you just want to make your way to my right a Black Maria will be by and you can climb on board.

The heavies nodded and their shoulders dropped. 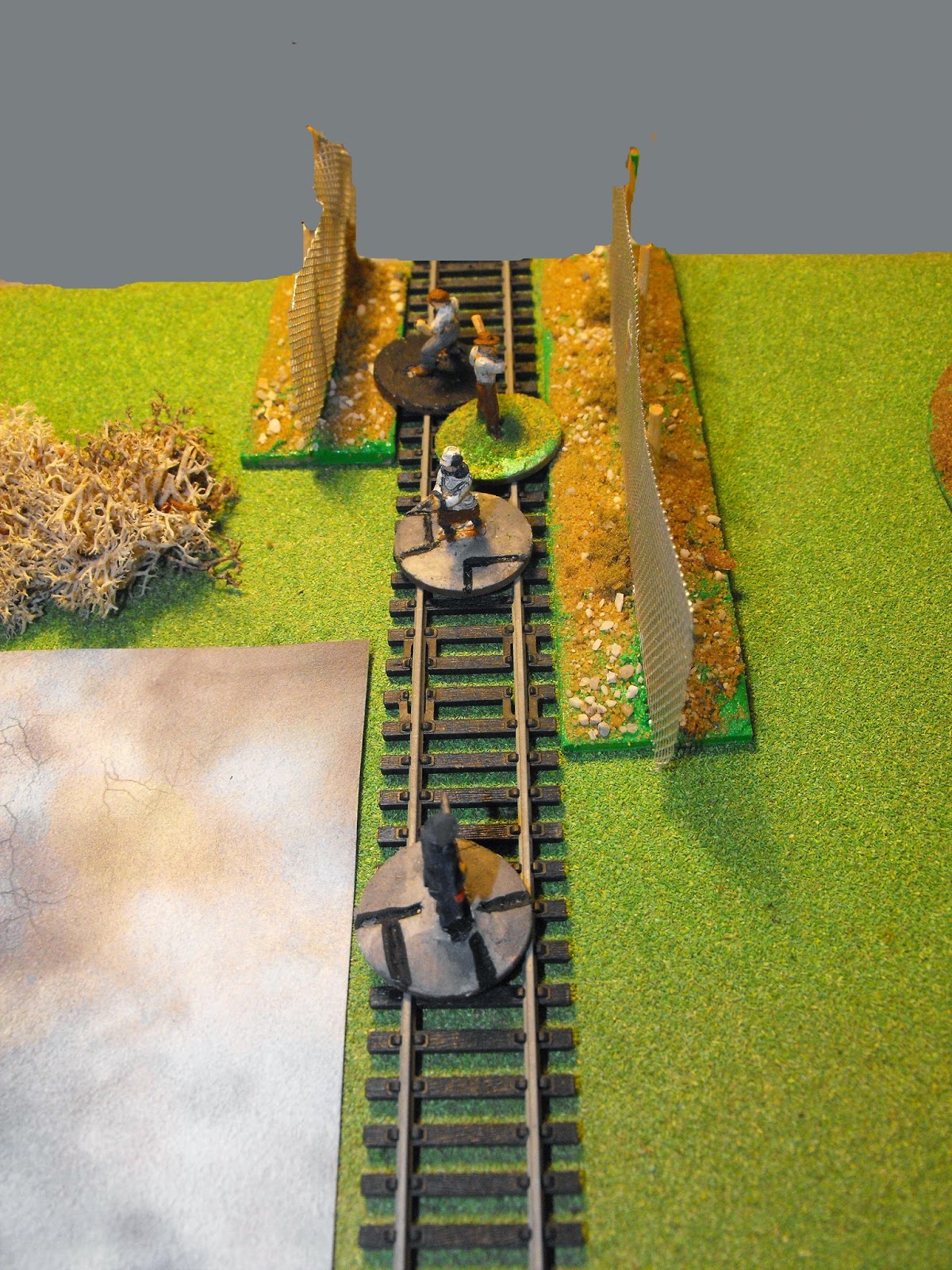 PEF resolution was the same as the previous one (Back story: They're all the same gang).

Turn 10 (5-5) (14) (1-2)
George Carter made his living on reading people and there was something wrong with this woman's body language, "Listen lady, I don't know what you've been through but you're safe now. So put up your gun and come to me."

Her eyes were wide, unblinking. Slowly she raised her chin, not in agreement but indicating. George followed her gaze to see the first zed he'd 'offed' climbing to it's feet. He snatched at his trigger an the shot went wide.

Nozzer saw the discharge, gunned the engine and headed to his friend's rescue.

George Carter shouted to the newly found group, "come on get behind me, towards the wagon!"

Doubles and a previously dead zed gets up.

Turn 11 (2-2) (7) (6-3)
A loud crack brought Carter's attention to a derelict building to his right. White smoked slowly drifted into the sky, the plume got thicker and was joined by leaping orange flame.

The ominous groaning and distinctive sound of shuffling roamers assailed his ears.

'Am I ever going to catch a break with these things,' he thought as a group of five beasts hove into his sights.

"Officer there's some over here too." It was a male voice and George didn't even bother turning. He saw the Black Maria bouncing over the rough ground.

"Get a bloody move on!" he screamed at the civilians and fired at the group of five roamers. Two burst asunder and one collapsed shot taking out a leg.

The doubles revealed a fire and 8 zeds were generated! GC's aim was getting better but it generated two more zombies.

George drew another bead and fired. Two more zeds disappear. Nozzer screeched to a halt a few yards from him. He pumped another shell into his breach and checked for reloads, only a couple more.

The civvies made it to Nozzer's Maria and George watched them get aboard.

The gang cut a break and no zed move.

George Carter made a quick survey of the cattle yard and ran. Scrambling into the cab he turned to his colleague, "make tracks Nozzer and don't spare the horses!"

Nozzer needed no further pushing as he floored his accelerator. The Black Maria jerked and pulled away.

The two officers looked at each other. Neither said a word.


Epilogue
Well the gang got away to fight another day. They'll need to report such a big contact, what will that lead to. they've saved a new gang and Jack Regan is patrolling the docks. Tune in for another episode in the adventure.

Well what with it being the closing day of the six nations (well done Ireland!); chauffeuring the eldest hither tither (15 year olds!); shopping for my old Mum and general household duties; it's taken me all day to write this. So I won't critique it. I may do so in a separate post as it was the first time I've used FFO exclusively.

Well folks thanks for popping by and reading. Keep on blogging!