Another late post. Once again due to failing health, and another weeks stay at hospital on i/v antibiotics. Thank heavens for modern medicine and the NHS, damn getting older! However it was somewhat on post as I was initially treated for necrotizing fasciitis (cute & zombie like, but not something you want to take to a party!)

Back to the plan. This was supposed to be my ﻿100th blog. The start of 'The BIG GAME'; Police, Military, gangers, civilians and hordes of zombies trying to escape 'Purgatory'. As it happens all I could manage over the last fortnight was to tidy up the shanty shacks. So it's not my 100th blog it's my 99th 1/2 one. 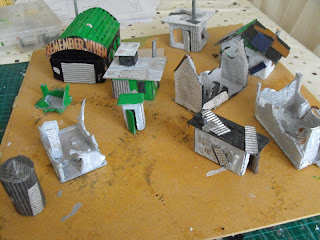 So here they are for your delectation.﻿

I undercoated the cardboard and pizza base﻿ models in grey. I forgot about the 'melting effect' of the paint. Which didn't effect the cardboard but actually gave the pizza base models a real fired look as it melted and rounded off the sharp edges, it also bent a couple of beams and pitted the walls/floors. A technique I will use again. Then just coated the various parts in suitable colours. Went to hospital.

Cut up some newspaper, pasted to the various buildings. With an unsteady hand outlined some panels on the shanties. 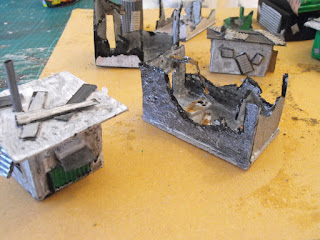 Highlighted the fire damage and washed the lot with black.﻿
﻿ 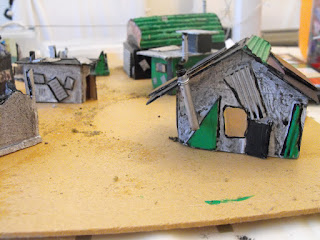 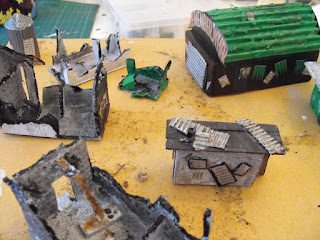 ﻿I must admit I just wanted to get it done and over with. They're not great but I think en masse with other bits and pieces I may get away with it.

Anyway take care out there and look after your health (we often take it so much for granted.)

All the best and thanks for reading,